A Change is in the Air – Literally

“Nothing is permanent except change”

The Greek philosopher Heraclitus reportedly said that nearly 3000 years ago. And while he had none of the conveniences for heating and cooling that we enjoy thirty centuries later, his quote applies perfectly to our current challenges of providing human comfort and storage of perishables without destroying the environment.

It is widely known that man-made refrigerants – the chemicals used to transfer heat to cool people, places, and products – have been doing environmental damage since their inception a century ago.

Likewise, it is also known that fuels – those carbon and hydrogen mixtures we burn to transfer heat to warm people, places, and products – are also creating problems with our fragile environment.

When humans discovered fire, their purpose was to survive within an environment that is not always considerate of the relatively fragile human body. Any material that could catch fire and burn became an object of desire, and as fuels progressed from wood to coal to oil and gas, it became easier and easier to burn them without much regard for the effect of that combustion on the earth’s atmosphere.

Water was the first material to be widely used as a heat transfer material. Its gaseous form – steam – and its solid form – ice – are still used in many applications because of water’s ability to transfer heat by changing phase, or state, from liquid to gas (vapor) or solid to liquid.

Centuries later, chemical refrigerants were invented that were also able to transfer heat by a phase change, but at temperatures and pressures more appropriate for the cooling needs of the human race.  These chemicals, while adept at the heat transfer so greatly desired, have been proven time and again to affect the quality of the earth’s protective atmosphere.

A look at where we are

It is a relatively well-accepted fact that climate change is upon us. Decades ago, scientists predicted severe climate conditions could occur with our increasing reliance on fossil fuels and chemical refrigerants. Those predictions have now been proven.

As a result, nations around the globe have implemented regulations and are proposing even more stringent measures to help curb the environmental changes that have thus occurred.

The impact on the HVACR trade

Remembering that nothing is permanent except change will be the mantra of the HVACR professional for decades to come. The technicians of a few generations ago thought nothing of burning sulfur-laden fuels such as coal and oil that provided the maximum amount of heat carrying capacity. Refrigerants as well, like R-11 and R-12, did a marvelous job of heat transfer and were highly regarded by those in the field.

But changes came, of course. The implementation of restrictions on the use of chlorine based substances such as chlorofluorocarbons (CFCs) and hydrochlorofluorocarbons (HCFCs) came first, followed by reductions in the use of hydrofluorocarbons (HFCs), coal, and heavy oils. And as advances are made in technology to help preserve our environment, changes in the equipment, tools, and service procedures of HVACR technicians will follow.

In the United States, California is usually regarded as being at the forefront of environmental protection, often surpassing the requirements of the United States Environmental Protection Agency (EPA) when it comes to air and water quality. Other states are beginning to follow suit, as legislators in those states apparently disagree with the action, or inaction, of the EPA. 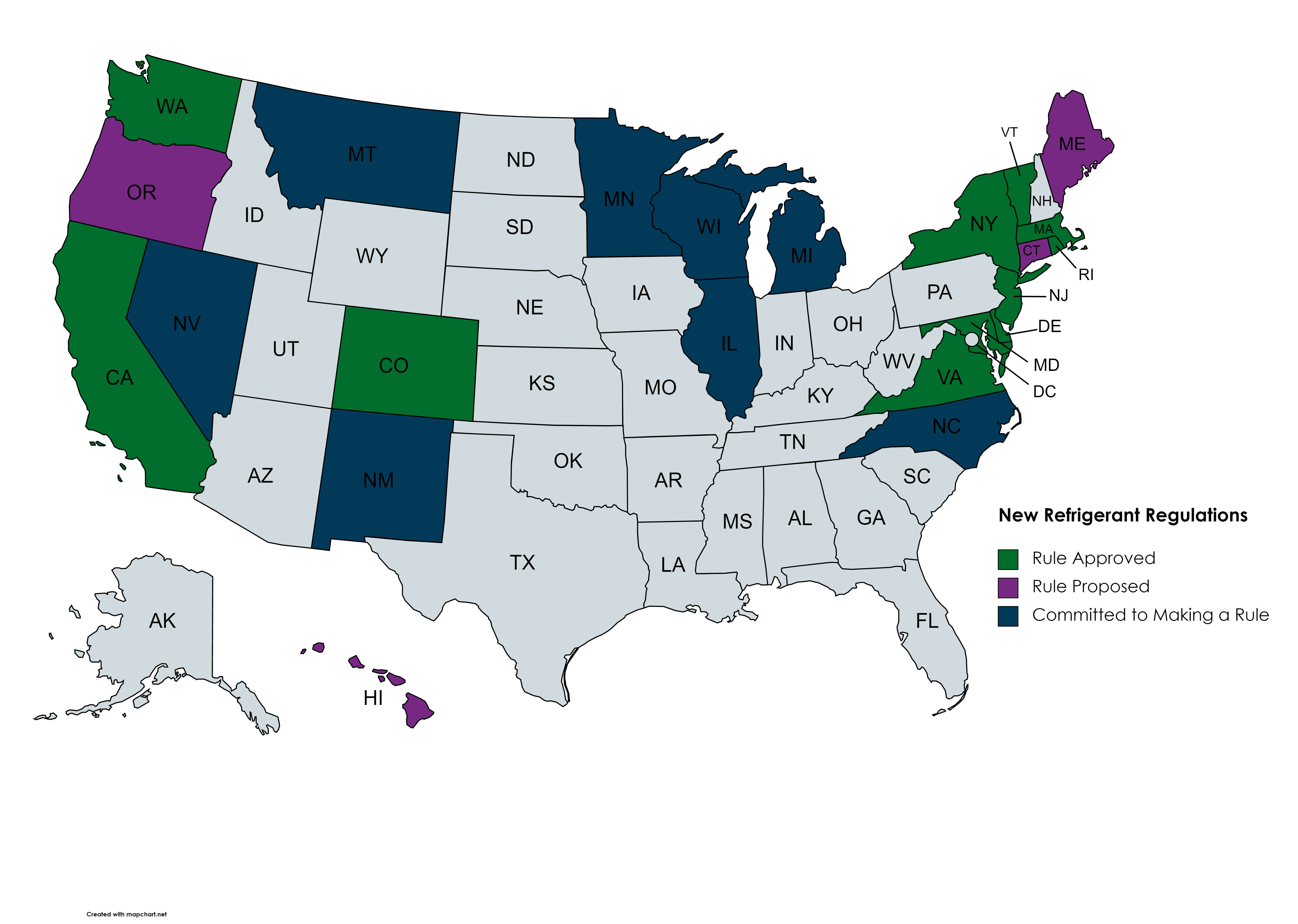 Map of states with proposed or approved refrigerant regulations

At the current time, California’s regulations include a limit on a refrigerant’s Global Warming Potential (GWP) of 150 for new or remodeled commercial refrigeration facilities utilizing more than 50 pounds of refrigerant; and effective January 1, 2025, a limit of 750 GWP for many types of air conditioning equipment.

In addition, California has mandated a reduction of HFC emissions by 40% by 2030 (based on 2013 levels); will ban the installation of new natural gas furnaces in 2030; and the sale of new gasoline powered automobiles will be banned in 2035.

As noted on the map shown, other states have either implemented or proposed regulations of their own.

At the Federal level, the United States Department of Energy (DOE) is proposing an increase in the minimum efficiency standard for furnaces. The proposed minimum of 95% AFUE (Annual Fuel Utilization Efficiency) for gas-fired furnaces would result in the elimination of non-condensing furnaces, as they cannot meet that efficiency standard. While still in the decision making stage, if approved the new standards would take effect 5 years after the date of approval.

State and federal mandates as enacted and proposed have come under scrutiny from the HVACR industry, with many individuals and organizations alike disputing the scope and manner of the changes. Regulations that differ from state-to-state will be difficult, no doubt, for manufacturers and distributors of equipment and supplies, most likely resulting in increased costs for consumers.

In addition, the relative differences between first-cost (installation of new equipment) and operating cost (energy consumption) and the effects these will have on consumers have been greatly discussed.

For example, if a condensing furnace (necessary to meet the 95% AFUE standard) replaces an existing furnace, the cost of the new equipment will be accompanied by a change in venting, resulting in an increased cost to the consumer. The DOE estimates an equipment cost of $536 million per year to be borne by consumers but returning an annual savings of nearly 3 billion dollars reduced operating costs and climate and health benefits.

The average consumer would save about $60.00 per year in fuel with the new heating equipment, according to the DOE. However, as some industry professionals have noted, many consumers, especially those in lower income brackets, may not be able to afford the new equipment in the first place, making a predicted savings in energy meaningless.

The challenge of change

As HVACR professionals, our industry faces a dilemma.

Environmental damage must be mitigated, and consumers must be able to afford to do it. The answers to the problems we face will be neither easy nor acceptable to all, no matter what is done.

But we must try.

Nothing is permanent except change.

Some text in the modal.